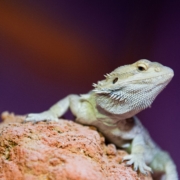 Young visitors to St Andrews Aquarium in Fife over the mid-term break have collectively raised £612 in aid of an Australian wildlife rescue organization (WIRES) that is battling the catastrophic effects of the recent bushfires, through a series of fundraising initiatives organized by the Fife visitor attraction.

WIRES (The New South Wales Wildlife Information, Rescue and Education Service) has been dealing with unprecedented levels of tens of thousands of calls to its helpline and thousands of call outs to rescue native animals affected by a lack of water, food and damage to their habitats. The devastating fires combined with the worst drought in history and record high temperatures have taken a tragic toll on native wildlife with many animals struggling as a result.

The fundraising activities were drummed up by the team at the Aquarium, who were frequently being asked by younger visitors to the attraction if there was anything that the Aquarium could do to rescue the animals affected by the bushfire.

“Young people care passionately about the planet and animals and we were increasingly being asked whether we would be taking in animals that had lost their homes due to the horrific conditions caused by the bushfires. While we’re a little too far away to be of immediate assistance, it got us thinking about what we could do to help and our team devised easy ways that the kids could fundraise around the Aquarium and help do their bit. It was simple things, like donating all the income from the kiddie rides in our foyer area, to donations for quiz sheets when they were visiting. We ran the fundraising activities over the mid-term break to make sure we got the most kids involved. It just goes to show the collective power of pocket money in helping to make a difference thousands of miles away.”

The donations to WIRES will contribute to directly support the animals in their care.

To find out more about St Andrews Aquarium www.standrewsaquarium.co.uk