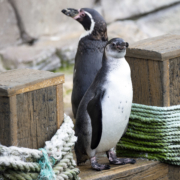 St Andrews Aquarium in Fife has this week has revealed the first official images of their 15-week old baby Humboldt penguin, Nathaniel, whose penguin parents are named after the tennis player Andy Murray and his Dad, William.

The baby penguin, who has already been waddling gleefully around his new enclosure for a few weeks, hatched into this world on 26th October 2019. It is the first Humboldt penguin to be successfully bred at St Andrews Aquarium who are part of a breeding programme to protect the future of this vulnerable species of penguin.

The Humboldt penguins have been resident at St Andrews Aquarium since 2013, with one named Andy in honour of the Scots tennis player’s Wimbledon win that same year. The other female penguins were named after Andy’s Mum Judy, then girlfriend Kim and grandmother Shirley while the male penguins, which followed in 2014, were named after the men in the Murray clan: Jamie, William and Roy after Andy’s brother, father and grandfather.

The baby penguin has been nicknamed Nathaniel, Greek for ‘Gift of God’, by the Aquarium team, although the baby penguin’s sex will not be known until a blood test is performed in another couple of weeks. Nathaniel is pictured waddling around his enclosure with his Uncle Roy, while Mum and Dad took a well earned break. In true Olympic spirit, befitting of his Greek nickname and sporting lineage, he’s already developed a taste for swimming in the natural saltwater pool with keepers remarking that he won’t even eat his dinner unless he gets to go underwater fishing for it first.

Nathaniel has been a real joy for us as we’ve seen him successfully develop and adapt to this, somewhat inclement, Scottish weather over the last 15 weeks. He’s got his feathering now, although his Humboldt markings are not yet showing, and he’s looking very cute – every bit the baby penguin! He’s reacting well to people and pretty much taking it all in his stride (or, wobble!). Mum and Dad are rightfully protective of him, but with their help he’s already mastered swimming, is feeding well and has made himself at home. His Uncle Roy also keeps a watchful eye on him, penguin-sitting him while Mum and Dad get a break from the joys of parenthood. We can’t wait to find out whether he is actually a boy or a girl, but it will be a couple of weeks before we know for sure.”

Members of the public can now meet Nathaniel when they are visiting and the keepers hold a daily penguin talk at 2pm. St Andrews Aquarium is open seven days a week in winter from 10am – 5pm, with last entry in winter at 4pm.

To find out more about St Andrews Aquarium www.standrewsaquarium.co.uk