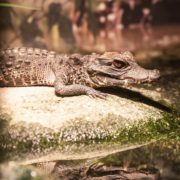 Two West African Dwarf Crocodiles have been busy making themselves at home at St Andrews Aquarium.

Nelson and Desmond have moved into their newly built enclosure at the Fife-based aquarium, which has undergone a wave of refurbishments over the last eighteen months.

The two crocs, which come from the smallest species of crocodiles, are native to the tropical lowland regions of sub-Saharan West Africa and West Central Africa. West African Dwarf Crocodiles grow to around 1.5 meters and weigh around 18-32 kilograms.

“It’s fantastic to see yet another part of St Andrews Aquarium completely refreshed and our new additions settling in well. Over the past three years, we’ve spent a considerable amount of time, effort and money refurbishing many of our animal displays.

“The work on the new crocodile tank was scheduled to take place over the winter but after seeing how much our visitors have been enjoying our new Amazing Amazon room, we couldn’t resist starting early. Even our most regular visitors have commented on the difference, which makes all the hard work worth it.”

St Andrews Aquarium has undergone a major refurbishment over the eighteen months, with the opening of The Reef early last year, a re-vamp of the penguin enclosure and the latest new addition, the Amazing Amazon.