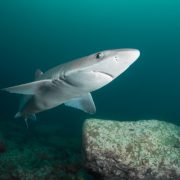 …and not a pooch in sight! Now, just to clear things up, the Dogfish is not a fish that barks or has a  wagging tail. In fact, it couldn’t be further removed from our canine friends. The Dogfish is in fact a member of the shark family. Perhaps canines of the teeth variety is the closest connection between the dog and Dogfish. Their one other similarity with dogs is that there are many species of Dogfish too – all varying in appearance, size and where they inhabit water.

Here at the Aquarium we currently have two species of the Dogfish that are noticeably different from each other. The first is the Lesser Spotted Dogfish which is sometimes called a Small Spotted Catshark (yes, we know – they don’t miaow either) but is better known as a Dogfish. The second species is called a Bull Huss which is less common that the Lesser Spotted Dogfish. The most noticeable difference between the two species is their size.

Some say less(er) is more

Alias: Small Spotted Catshark, Scyliorhinus caniculaSize: 80-100cmAppearance: a slender body and a blunt head. A greyish colour with dark spotsSpot me: off the coasts of Europe from Norway all the way to Africa

We said “hello” to some new arrivals at the end of 2014 when we introduced three Bull Huss to the Aquarium. The trio have rather aptly been named after their scientific name, Scyliorhinus stellaris.

Here’s a bit more background to our Bull Huss so you can spot them when you are at the Aquarium:

Alias: Greater Spotted Dogfish, Large Spotted Catshark, NursehoundSize: anything up to approximately 150cmAppearance: like a Lesser Spotted Dogfish, but larger with large brown patched on its back and sidesSpot me: on the sea bed in the North Atlantic off the coast of Britain and Ireland

E is for Eels…

C is for Caimans…
Scroll to top