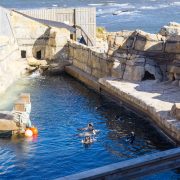 St Andrews Aquarium’s waddle of Humboldt penguins have been settling into their new surroundings after an exciting redevelopment by one of the UK’s leading aquarium theming companies. The new £50,000 enclosure boasts being the ‘newest and best in the UK’ and the penguins – and their aquarium friends – have given it their seal of approval.

The enclosure is now home to the aquarium’s six resident penguins, who were all named after Andy Murray and members of his family after a public competition and have even been given the nod from the Murray’s themselves after a visit from Judy in 2013. St Andrews Aquarium offer a popular penguin feeding experience, giving visitors the chance to learn all about the penguins, prepare their food and step inside the enclosure for a unique and unforgettable experience.

“We’re delighted by the transformation of our penguin enclosure at St Andrews Aquarium and it’s been great to see the penguins enjoying their new home. The exciting redevelopment, as well as the addition of our new tropical zone ‘The Reef’, means that even if you’ve visited the Aquarium before there will be lots more to see over the October break!”

Humboldt’s are medium-sized penguins and are around 60cm in height and around 4-5kg in weight. Originating from South America, their numbers have been in steady decline over the past decade due to over fishing, habitat destruction and climate change.

The redesign of the penguin enclosure comes during the latest wave of refurbishments for St Andrews Aquarium. In Spring, the aquarium opened ‘The Reef’, after enlisting the help of leading European aquarium company Aquarium Technology Ltd and splashing out £30,000 to reproduce the look of tropical waters using replica corals and imitation rocks, with displays that create the feel of walking through a reef.

12 fishy facts for back to school, with Dory & Nemo

R is for the Reef
Scroll to top