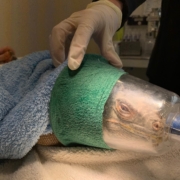 The team at St Andrews Aquarium in Fife have had to step in to break up a full “scale” Iguana fight between their two resident iguanas, leading them to believe their October holiday campaign called “Mischief in the Making” may have been taken far too seriously by the animals involved.

The two green iguanas, who have been resident at the Aquarium for several years, have never fought before. The recent scrap between the two (a male and a female), however, resulted in a trip to the vets this week and the requirement for both to get stitches.

“I’ve no idea what they were fighting about, they’ve never fought before, but we needed to seek veterinary treatment for both of the iguanas today. In their scuffles, they have managed to pierce each other’s delicate reptilian skin and, because it doesn’t heal as easily as human skin, they have both required stitches!

“We’ve been running an October marketing campaign called ‘Mischief in the Making’ which is largely centred on the naughty antics of our monkeys, penguins and seals. Perhaps they were feeling that they weren’t getting enough attention as a result, but suffice to say, they are now at the top of my list as aquarium mischief makers!”

Both iguanas have been given the all clear by the vets and are now on the mend and expected to make a full recovery. Iguanas are normally very laid-back animals, but have been known to be territorial, with fighting often seen as an assertion of dominance.