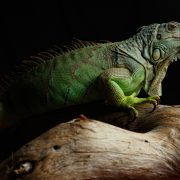 Iguanas are highly adaptable lizards, characterized by their long thin tails and spines along their back. They are mainly herbivores, but have been noted to eat things such as eggs, insects and rodents when they need to. Iguanas are also talented climbers and swimmers, making most environments suitable for them to escape potential predators. There lizards are found all over the world, but are concentrated in Central and South America and the Caribbean.

Say hi to our Green Iguanas

Our two green iguanas are the more common of the iguana species found in South America, the others being the larger Black iguana, in Central America, alongside the Rock and Lesser Antillean iguanas – which are only found on islands in the Caribbean. The Green iguana, however, can be found right across South America and is famous for its bright green scales and relaxed approach to life. There are even so many of the lizards in places like Puerto Rico that they are considered pests, but a lot of people think they make good pets, but they need a lot of looking after.

Size: Usually measure around 1.5 meters (including the tail) but can reach over 2 meters in length

Appearance: Bright green with flashes of red and yellow

Spot me: From Paraguay right up to Mexico and the Caribbean

R is for the Reef

H is for Humboldt penguin…
Scroll to top