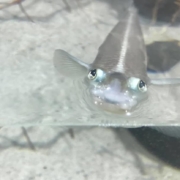 St Andrews Aquarium in Fife is the first aquarium in Scotland to welcome a display of rare four-eyed fish this Autumn. The shoal of 10 Anablaps, which originally come from the rivers of South America, have been transferred to St Andrews Aquarium from Living Waters at Paignton Zoo in Devon.

The Anableps use their bizarre eyes to see both above and below the water’s surface at the same time. The pupil in each eye is horizontally divided into two parts, giving the impression they have four eyes. This unusual anatomical anomaly allows the fish to find food at or below the surface and also give it extra protection against predators from above and below.

John Mace, general manager of St Andrews Aquarium said: “They’re amazing-looking fish and I fully expect they’ll be one of our most popular freshwater species here at the aquarium. They are quite mesmerising to look at and, most unusually, unlike other fish they don’t lay eggs but actually give birth to fully formed fish which is quite rare. We’re hopeful that they’ll settle into their new home quickly and we’ll be looking at young Anableps joining the shoal in due course.” St Andrews Aquarium is open seven days a week from 10:00am – 6:00pm, with last entry at 5.00pm.