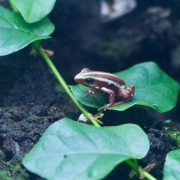 Frogs are all over the place, they are native to every continent of the world, thriving in most places which isn’t dry desert or frozen ice. On top of that frogs are everywhere, in the water (fresh, not salt), on the ground, underground, in the trees, so frogs even fly through the air but that is usually when they jump out of the tree.

Frogs are amphibians, which comes from the Ancient Greeks meaning something which can live in both the water and on land, but doesn’t have fur like mammals, or scales like reptiles, or hard shells like crustaceans. Most frogs start as an egg which hatches into a tadpole in lakes, before growing into a frog and leaving, but a few frogs skip this and give birth to babies.

Frogs are famous for hopping around and most frogs have quite large back legs, but small front legs. This is because most of the muscles in a frog’s legs evolved to extend its leg, while only a small few focus on bringing it back to the start. This is to help a frog escape predators and with a sticky grip means a frog can jump from plant to plant and getting away from hungry spiders and snakes.

This frog is very common in the Northern tip of the Amazon rainforest and can be recognized by its distinctive black and yellow patterned skin. The frog is also very poisonous! It secretes poison through its skin and produces this poison by eating an insect, but scientists are unsure which bug has this effect. Amazonian tribes would dip and rub large thorns into and against the frogs skin to make them poisonous, which they then used to hunt and catch other animals.

Spot me: Near water and in the trees of Venezuela, North Brazil and West Guyana

H is for Humboldt penguin…

E is for Eels…
Scroll to top