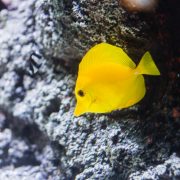 Many kids headed back to school in the next few weeks will no doubt have their heads full of the hit film Finding Dory.

The animated feature has been topping box offices in the UK and Ireland, with families flocking to see the long-awaited sequel to Finding Nemo. But while everyone knows Dory, not many know that she can go by a string of different names, among them Regal Blue Tang, Surgeonfish and Doctorfish. And did you know that it’s a myth that fish have memory problems like Dory does?

These 12 facts are designed to give kids, parents and their teachers a bit of schooling (geddit?) in our finned friends. And they’re also aimed at making that summer-to-school transition just a little bit easier.

12 Fishy Facts about Regal Blue Tangs and Clownfish, aka Dory and Nemo: